“Black holes are where God divided by zero.” – Albert Einstein

What is a Black hole?

A black hole is defined in simple terms as space that is dense and has a strong gravitational force such that even light cannot escape and hence the name “Black Hole.” The astronomers have identified four types of black holes: Supermassive, stellar, intermediate, and miniature.

How are Black Holes formed?

The primordial black holes, which are the smallest black holes, were formed right after the big bang theory. The astronomers think that the miniature black holes were formed due to an event known as inflation, which is a process in which the rippling vacuum of the early Universe rapidly expanded, leading to the collapse of dense regions.  When stars that are almost 10 to 20 times massive than the Sun, undergoes depletion of its fuel, lose mass and collapse to become dense neutron stars or stellar black hole. The supermassive black holes contained much more mass than a typical stellar black hole and were formed when the galaxy they are in, were created.

The intermediate black holes whose mass ranges between 100 to 1000 solar masses are predicted to have been formed either due to the merging of individual black holes or when a black hole pulls in a large amount of materials into it to obtain this amount of mass.

Structure of a Black Hole? 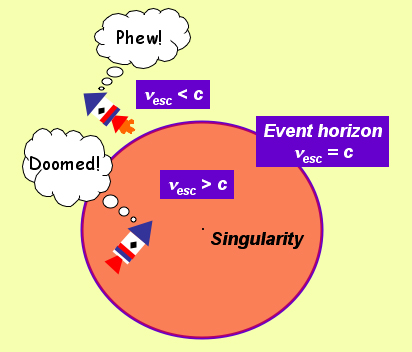 How are Black Holes studied?

Black holes cannot be observed because light cannot escape a black hole, and therefore, the Astronomers study black holes by observing their effect on its surrounding regions. Black holes have an impact on the stars orbiting close to it, and as a result, high-energy light is produced, and this light is studied to know about the black hole. National Aeronautics and Space Administration (NASA) is learning about black holes using spacecraft like the Chandra X-ray Observatory, the Swift satellite, and the Fermi Gamma-ray Space Telescope.

A Brief History Of Time: From Big Bang To Black Holes